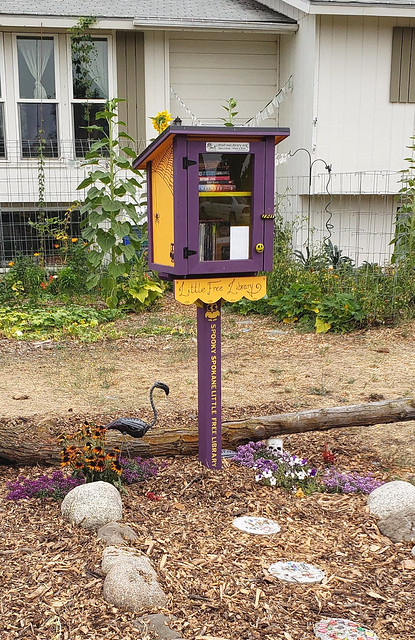 Our Little Free Library has been open for almost two months now (it will be two months in just a few more days as we did managedto open on the suitably spooky date of Friday the 13th) and I wanted to post a little update on how great it has been so far.

I’ve received enough donations in the last month that I have a couple boxes worth of extra books so I can rotate selection to keep things fresh and have even had a couple themed weeks! There is a box for extra bookmarks and the occasional other goodies like colour changing pencils and cute erasers in there now too. Hallween season is almost here so I am hoping to stock up on lots of little trinkets to use throughout the year since we are spooky themed. We have started adding some landscaping around it as we are working on pulling up our front lawn in favour of an edible and xeriscaped space. One of my children’s grandmothers, who is a rather passionate geocacher, added a geocache near the library too so we are attracting that crowd now, the ID for it is GC7X3JY if you too are in to such things. (Admittedly I find it kind of fun to watch people trying to discretely “snoop” around the library looking for it from my studio window.)

Basically all my initial worries about living in a rougher part of town prone to acts of vandalism have not arisen, though we have taken multiple preemptive steps to hopefully largely prevent them.

Our library is lit with two solar lights that I attached to the side and siliconed into place. We placed it in full view of our front windows so anyone up to no good has to do it in either full view of our living room or my studio. Most importantly though, we make sure we interact with our neighbours as they pass by. Several were initially uncertain of the purpose of the library, but as soon as we explained it when we saw they curiously poking about, they were very onboard, and for the most part are quite protective of it too. I do really feel it has helped us connect more closely with our street. Our guestbook in the library is often filled with thank you notes as well as book requests. It has been worth it.

I’m curious to see how the project goes over winter with the snows and shorter days. The solar lights get full daylight, but we will see how they fair in our cloudy winters. I’ll be sure to post another update in a few months.

If you are interested in following our Little Free Library on social media, I have pages set up over on Instagram and Facebook. I hope you drop by and leave a book and take a book!