We are about to bump into more translation woes with Kenaz, and the interpretations could not be more different. In the Norwegian and Icelandic rune poems, this rune is referred to as Kaun and it means ulcer, however in the later Anglo-Saxon poem it is referred to as Cen and means torch. 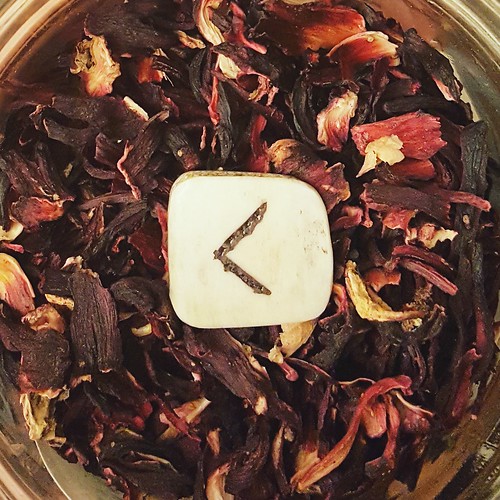 Icelandic Rune Poem:
Ulcers are fatal to children
and painful spot
and abode of putrefaction.

And the Anglo-Saxon Rune Poem:
The torch is known to every living man
by its pale, bright flame; it always burns
where princes sit within.

So we go from illness and death to the seemingly vastly different idea of having our path lit before us. Does this throw a wrench into our esoteric interpretation? Maybe not as much as you might think, but I’ll get into that in a moment. Modern esoteric views of this rune lean much more heavily towards it’s interpretation as torch and tend to focus on ideas of knowledge, pursuit of truth, creativity, illumination, insight, harassing power, and healing but also to a certain extent disease, decay, and elitism.

The Old Norse “kenna” means “to perceive” or “to know” and it is from this perceptive Kenaz is often viewed. In the torch, we harness fire for our purposes, driving back the dark, and with it’s warmth it can create a place for healing, or aid in the ongoing search for knowledge and inspiration. The barriers that were knocked down back at Thurs now let this light pour in to our lives. 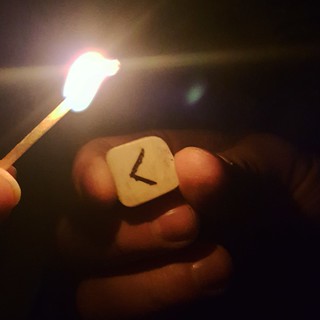 I have read Kenaz described as a torchlit ancient library, and I feel this symbolism. The idea of wandering around dusty stacks, seeking answers as the light pushes back the unknowable darkness, the torch potentially bringing to light the answers we are seeking, but also sometimes lighting up something we did not know we needed until that moment. Kenaz can be knowledge, but also sudden inspiration.

Knowledge though, does not often come without a price. Having the blinders removed to a truth we are not prepared for can hurt. The fire of the torch is harnessed, but not harmless, and it can still wound. Also knowledge that is withheld can lead the elitism and a self-centered belief in one’s own superiority.

In bindrunes, I particularly like Kenaz combined with the awareness of Mannaz as well as the divine inspiration of Ansuz to make a powerful creativity talisman. When linked with other runes, like the cleansing waters of Laguz and the warmth of Sowilo, it can be a call to healing, as well an aid to finding the path to healthier choices.