The most common translation of Ansuz is God, not the Christian god, but the chief god of the Norse pantheon, Odin, or Gautr as he is sometimes known. In the Icelandic rune poem Óss is the word of Ansuz, and the stanza translates as such:

Óss is aged Gautr
and prince of Ásgarðr
and lord of Vallhalla. 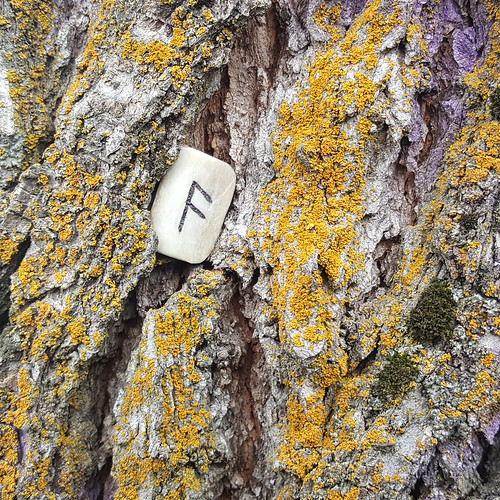 To understand this rune, we must develop an understanding of Odin, and what he represents, which admittedly is a rather expansive topic that I am going to try to briefly cover. I will admit right up front I struggled so much with this post as I do not feel connected to Odin in the least and have a few hangups in this area of the Norse pantheon, but let us power through!

Starting from the old Norse though, Óðinn translates as the “Master of Ecstasy” (óðr for “ecstasy, fury, inspiration” and -inn for “the master of.”) But what does this mean? Odin has multiple aspects that are important to recognize, even if they do at times seem to be in conflict with each other.

Though Tyr is most often associated with the role of war god, Odin too is often given this title, but whereas Tyr is more focused on law and justice, Odin favours the outlaws and excessively strong-willed over the average warrior. Coming back to his name, “óðr” can translate as “fury”, and he is just that, the fury of the berserker, more concerned with the heat of the battle than its causes or resolution.

In contrast to this, he is also the shaman. We see tales of Odin sacrificing his eye at the Well of Urd, which feeds the great cosmic tree, Yggdrasil, to gain wisdom. In another myth, he stabs and hangs himself from Yggdrasil, denying himself food and water, until after nine days and nine nights of gazing upon the runes he beholds their secrets. It can certainly never be argued that Odin only goes halfway with the tasks he chooses to focus on!

In yet another aspect we see Odin as the giver of life as well as inspiration. It was Odin who led the gods in giving önd (breath), óðr (ecstasy), and lá (possibly health) to Ask and Embla, the first humans, and to them was also given Midgard, our world, as their home. In the realm of inspiration it was Odin who stole the Mead of Poetry from the giants, and who dispenses it to those he deems worthy.

As you can see, Odin has numerous facets to his being, just as many of us do. It takes effort and focus to keep all these parts of ourselves in balance, the part that works, the part that has faith, the part that creates, and all these aspects are reflected in Ansuz. Following the chaos of Thurs, we have now reached a place where there is more in order. That said, a fellow rune reader once told me once that Ansuz was so many things, but that there is a lack of perspective and compassion in this rune,as it largely focused on the elevation of self rather than the community. So while this might seem to be an enlightened position, we cannot remain here in our runic journey, there is so much more to learn.

When using Ansuz in bindrunes, it is a great rune is you feel drawn to Odin and wish to ask for his insight. Being related to inspiration, it is also a rune that might be used in certain combinations for writers, artists, and other craftsman.

As a reminder, until I get the newsletter link up at the top of the blog, you can sign up for emailed updates of when I post a new entry using this link!