I knew when I was pregnant with my first child that our approach to holidays would be a be different from the mainstream. In particular, as a Norse pagan, I don’t really connect strongly with Christmas, celebrating the birth of a god-child in a faith I do not follow, or Easter, to recognize the same god-child’s rising from the dead. 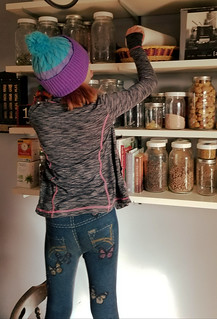 Easter is coming though, and I do love the secular aspects of it. The candy hunt, the bunnies, colouring eggs, all those things feel so pagan to me, and in many ways, they are! Even the name Easter might predate its current Christian associations. So I still do them with the kids, but rather than trying to remember the date for Easter – the first Sunday, after the first full moon, which happens on or after Spring equinox (Holy Hel, even that sounds rather pagan doesn’t it?) – we just do them on the Spring Equinox, or as we call it, Ostara.

Over the years our traditions have evolved somewhat. My spouse and I tend to get the children each a gift, sometimes small, sometimes big, on each high day. (This year my eldest received a new messenger bag designed to hold his camera, and my youngest got a bowl featuring her favourite cat, Pusheen.) We always have an egg hunt, which my spouse makes more challenging each year at their request (thank you random jelly bean filled egg that was forgotten falling out of my measuring cups at lunch…) We usually colour eggs, though this year we are painting goose eggs that I bartered for and blew out (we ate them scrambled for breakfast!) 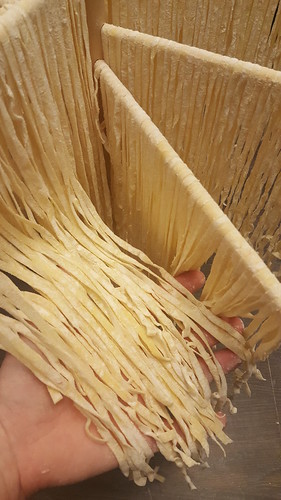 Starting a couple years, we do a colouring sheet for our grimoires after breakfast. Sometimes I design them myself, but a couple times now I have used ones that I have modified from various pagan children activity books I’ve picked up over the years. My favourite new one, starting just this past Winter Nights, is that we make homemade pasta for almost every feast.

Today was no different on the pasta front, though rather than the beet red and white pasta combination we did at Imbolc, we made saffron yellow pasta this time – with duck eggs as those also came with that recent goose egg barter. We had them with a homemade goat cheese sauce, spring greens, and broccoli. My eldest also made a really amazing chocolate almond torte for dessert. I humble feast perhaps, but one made with our hands around the table.

I love making pasta with my spouse and children because, it is a lot more fun with a group and that laughter and enjoyment feels so much more sacred to me. We generally also take some time to talk about the meaning of the festival during that time, though today my spouse and I also found ourselves taking the children on an auditory trip through turn of the century music as we worked. (I just realized that late 90s is turn of the century now… Ouch!) 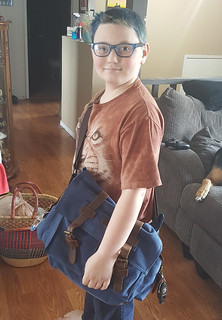 Ritual wise, we are more fluid in this aspect viewing many activities throughout the day as ritual. Outside of magic for certain purposes though, as well as meditation, or sometimes them helping me with offerings to the ancestors, we have not been very heavily formal ritual focused family, but this has been largely because my children have been quite young and lacking interest in this area. I am not one to pressure them to match my belief system. Late last year though, they both expressed and interest in starting to be more participatory in ritual and offerings, so we have begun holding small ones, where they have a few lines to learn and actions to preform. This week, after we finish installing new trellis in our front garden area, we will be holding one to bless our garden and giving an offering to the landvættir (land spirits.) I believe the children also want to make a faery home for near the front oak too, so I think we will incorporate that into the project and blessing!

How about you? Do you celebrate Ostara? What kind of traditions do you have? I’d love to know.