In Thurs we run into a similar translation issue as we did back at Ur, two different meanings, to some it is giant (thurisaz,) and others it is thorn (thurnuz.) As a quick note before I jump to the rune poems, the “thegn” used in both of them translates to “one who serves” and is usually taken to mean a servant or retainer.

In the Icelandic rune poem we have:
Giant is torture of women
and cliff-dweller
and husband of a giantess
Saturn’s thegn.

And in the Anglo-Saxon rune poem:
The thorn is exceedingly sharp,
an evil thing for any thegn to touch,
uncommonly severe on all who sit among them.

So is it giant or thorn? I’ll let you decide. Personally I lean more towards Thurs meaning thorn, but that is possibly because I like thinking of things in practical ways – I don’t see many giants getting in my way, but my garden sure as heck has a lot of thorns. 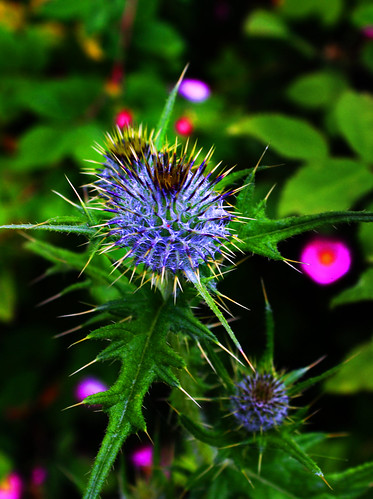 Just because thurs is an obstacle rune though, does not mean it is “evil”. The thistle’s thorns do not exist to be good or bad, they exist to protect the plant. Or, if you prefer Thurs translation as giants, myth and legend would be pretty freaking dull without an epic foe for the hero to triumph over. Not to mention, my goddess, Hel, would not exist, if not for Loki’s courtship of the giantess Angrboda.

Obstacles frequently can help our development. They find their way into our path to strengthen our resolve, or cause us to pause and rethink, or sometimes break down barriers so we can rebuild on a more solid foundation. Sometimes we must suffer to find our center and grow our understanding and compassion (compassion, which literally means “to suffer with.”) I have a wild rose on my property, covered in thorns, but though it is a hazard the unwary, it has the most heavily scented roses, and bears the largest rose hips.

One of my favourite bindrunes I have seen that uses Thurs combined it with Ingwaz (representing family in this instance) and Algiz (the protection of self.) In this combination, the obstacles of Thurs are turned outward, and as the thorns protect the rose, Thurs protects the family from interfering forces. I often find myself using Thurs in similar protective combinations, but also in ones where a barrier needs to be broken down to create a safe path forward.

Nerd moment: Did you know the “th” sound as in “thunder” is called a voiceless dental non-sibilant fricative and is rather rare in the languages of the world. You will thank me for this knowledge some day!

The thistle photo in this post was taken by Andrea Parrish Geyer, and used and modified with her permission.

< Reading the Runes: Ur
> Ostara