Before I launch into the meaning of this rune, something that is not often discussed is that this rune possibly has a different meaning than the most frequently mentioned one. Ur may come from the Proto-Germanic word ura or uruz. This is significant because ura went one to become the Anglo-Saxon word for aurochs, whereas uruz became the Icelandic words for rain. We may never know which was the intended meaning for Ur in the Elder Futhark however as it has no surviving rune poem associated with it, and if we look to the other rune poems for guidance we also find two opposing interpretations. 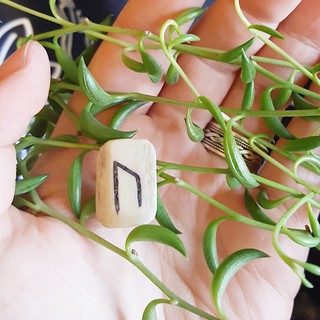 From the Anglo-Saxon rune poem:
“The aurochs is proud and has great horns;
it is a very savage beast and fights with its horns;
a great ranger of the moors, it is a creature of mettle.”

Alternately from the Old Icelandic rune poem:
Rain is lamentation of the clouds
and ruin of the hay-harvest
and abomination of the shepherd.

Clearly, your interpretation of this rune may be vastly different depending on if you lean more towards Icelandic or Anglo-Saxon varieties of heathenism. It should be noted however that modern rune users tend to use aurochs as the translation (almost without exception in fact.) Furthermore the gothic alphabet supports this idea, as it’s “u” equivalent also means aurochs. I could get super academic here, but I leave it to you if you feel called to look it up further and reinterpret this rune as rain. (I’d love to hear from you if you do!) I personally take ur to mean aurochs.

Based on this assumption, esoterically speaking, Ur deals with ideas of strength, passion, health, rites of passage, endurance, freedom, the primative mind, and shamanic experiences. 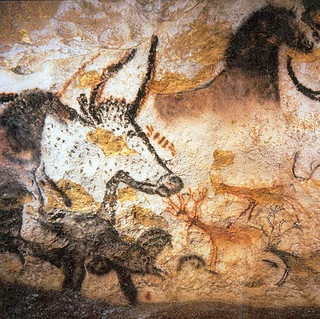 But what the heck are aurochs anyways? Aurochs were a species wild ox that were once found in Europe, Asia, and North Africa. They are the ancestor of modern domestic cattle, but were driven to extinction in the early 17th century due to over-hunting, habitat encroachment, and disease spread from domestic cattle. (On a side note, there is currently the ongoing Uruz Project attempting to bring them back from extinction, which I find all kinds of fascinating.) Painting of aurochs have been found in neolithic caves, like the ones in Lascaux, France. Some archaeologists believe that the aurochs may have been an important rite of passage into adulthood for the hunter-gathers of that time.

Following the mundane by necessary foundation laid at Fehu, we move to Ur, our first of several initiations into the mysteries of the runes. To me, Ur represents the young hunter, striving to feed themselves and their people. To kill the aurochs initiates them into their first mystery, the knowledge that from death comes life.

When I am creating a bindrune, Ur is often the first that leaps to mind when I am working on crafting one that focuses on self healing, as it pulls us back into the shape we were before a traumatic event. It is also one that I might use for coming of age bindrunes, or being our most authentic self. Cattle were shaped by man’s domestication, but the aurochs are their primal ancestors, untamed and full of raw power.