(My current set of runes. I carved these from deer bone and inlaid them with hematite.)

Throughout neo-paganism there are many forms of runic alphabets, some based on historical evidence and others more modern in their creation. Each has their own shape, power, and meaning, as well as their own magical uses, but for the purposes of this blog series, I would like to clarify that I use of the Elder Futhark runic alphabet in my studies, readings, and other workings. Not really because it is the oldest of the runic alphabets, though it is, from the Völkerwanderung era (~300 to 700 CE,) but mainly because I felt most drawn to it years ago when I made my very first set. I have simply stuck with it ever since. 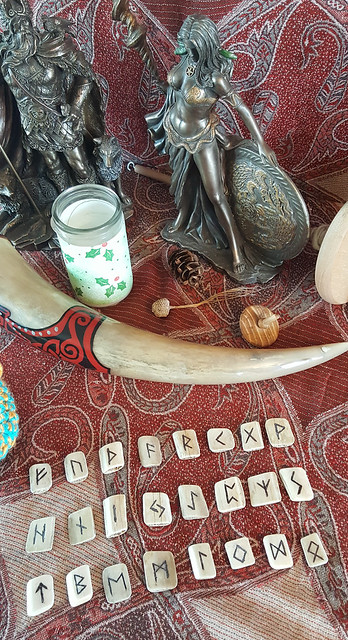 To be honest, I was not exactly sure where to start with my thoughts, I have pages and pages of handwritten notes in my personal grimoire on the runes. They contain my thoughts on each individual rune, the ways I cast them, their relationships to each other, their magical uses, my thoughts on bindrunes. Just… a lot of information. And you have no idea how much I have reread and proofread this post (though I am certain there are a few errors my dyslexic brain completely overlooked!) But, I thought I might start with something that I feel is important but seems to be frequently overlooked with new practitioners, and that is the three aettir.

There are 24 runes in the Elder Futhark, which is split into three aettir (singular: aett) each containing eight runes. While there is some debate over the naming of each aett they are generally accepted to be as such:the first aett is that of Freyja’s, the second is Heimdall’s aett, and finally there is Tyr’s aett.

The truth is, no one is exactly sure what the purpose of the three aettir is, which is why I feel it is frequently ignored by some. Unverified personal gnosis is a delicate subject within many pagan groups, particularly reconstructionist ones, but I feel that when leading a spiritual life, it is an aspect of one’s practice that cannot simply be ignored.

My thoughts on the meaning of the aettir are varied and admittedly occasionally reaching due to the uncertainly of the original purpose of the aettir and their naming, but in a nutshell, I see each aett as a journey with its own initiation and guidance. Each one presents its own challenges but also offers tools to their resolution.

In the first aett, we are in the presence of Freyja, goddess of beauty and fertility, however she should not be dismissed as a pretty face as she is strongly connected to the Valkyries, and half the dead from battle go to her great hall of Fólkvangr. She is a goddess of love, but also linked to death, a völva, and keeper of many mysteries. She leads us from the mundane matters of the first rune of Fehu to the glory and joy of the final one of her aett, Wunjo.

In second aett, we are in the presence of Heimdall, who’s prophetic nature and keen ears and eyes wait for the start of Ragnarök. He is the silent watcher, but also the warrior foretold to kill and be killed by Loki. The unwaveringly dutifulness of Heimdall can be our example as we fight through the trails of his aett. It is easy to get stalled in our journey here, which starts in the chaos of the rune halagaz, but our hard work is rewarded in sowilo and a brief rest in the ecstatic energy of the sun.

The third aett is that of Tyr, the god of war, but perhaps more importantly, also the self-sacrificing god of law and justice. He is believed to have once been the chief god in the Norse pantheon (superseded by Odin and Thor at some point during the Völkerwanderung era.) Tyr’s aett offers lessons regarding the importance of voluntary sacrifice and the deep mysteries of the wounded god.

Upon the completion of one aett, or one set of mysteries, we are led into the next with a new initiation at a higher point of understanding, and then the next, but there is never an end to this study because the runic journey is a cyclical one. We always have room in our experience for new heights of understanding, so just when we might feel we have found our place with the final rune of Othala, we find our way back to the day-to-day realities of Fehu, and the cycle begins anew.

The aettir represent the stages in a journey where we are a traveler who must deal with the mundane and spiritual, overcome obstacles, interpret important information and gifts, and occasionally take a breather before refocusing and continuing. What do you think of the significance (or lack of perhaps!) of the aettir? Are they on your mind when you cast, or something of little meaning in your practice? I don’t think there is any one way to read the runes, so I look forward to hearing your thoughts.

My next post will be about the first rune, Fehu, and I will work through the remaining twenty-three runes in subsequent posts, and then perhaps go over some casting methods? I’ll probably play it by ear by that point. You can still expect my regular business update posts and life posts scattered throughout of course, my mind rarely focuses exclusively on one thing.

On an important note, I frequently post of on social media when I have new blog posts up, but in this age where RSS feeds are no longer the norm, it can be hard to reach you, my lovely readers, purely through curated social media. Thankfully though, email is still there and largely un-curated, so I am going to start following the example of some of my favourite blogs and send out a brief newsletter each time I update this blog. If you would be interested in never missing a post, please considering signing up for my newsletter.

Oh! Also! I want to dedicate this new blog series to a few of my wonderful friends and followers over on Instagram for their thoughts when I was debating the thought of adding yet another personal interpretation of the runes to the internet. Jeremiah, Rachial, Heather, and Ann, thank you! You honour me with your encouragement.