This is part three of my continuing saga on when our heating system failed in the middle of winter. This is where things start to cost, though these are the things we paid for before we got to replacing the heating system.

As I mentioned in a previous post, we didn’t have a tremendous amount in the bank at the time of the heating system biting it. I tend to spend a little more around Halloween (we love Halloween most of all) and it is also right before the holiday shopping season when it comes to our business, kind of a slow point ahead of Cyber Monday.

In the few days following the leak I had the system inspected by a gas specialist (which fortunately was part of a free quote, so that didn’t cost) and was told that the heat exchanger had cracked. While this looked like something tiny thing that could just be welded to me, I am by no means an expert. So tiny crack or not, the system had to be replaced to be re-certified by the gas company.

No estimate was less than $4000, an amount I simply did not have. What I did have a lot of, is, how should be say… pride issues. I did not want to ask for help. I did not want to start the GoFundMe that several friends. I can be independent to a fault, and I didn’t want to seem like a failure. My father had to call me and chew me out a bit about my pride so by the time I got over it (having your kids tell you they are cold helps with that too) and then gettting together enough cash for the replacement system, I then could not get it installed until December 18th, about 6 weeks away. Apparently everyone’s heating system loves to break in the Winter. I suppose it is not terribly surprising considering that that is when people turn them on.

Six weeks to stay as warm, so yes, we did have to buy some extra stuff. Some we already had, but I would have had to buy it if we had not. This is what we got and how I feel about it now.

Let’s get real, this in the Inland Northwest in early winter. We aren’t exactly known for our sunny days in November. So we did have to get space heaters. We were fortunate to have a friend lend us a pair that she used to use in her barn though, so we saved money on the initial purchase there. For the record, they are EXPENSIVE to run. My usual November electricity/gas bill was $80. With space heaters it was $120. Also you can trip your breaker if the circuit has other stuff running on it. So let’s not start a wall fire m’kay?

We mainly just used one downstairs to heat the studio and also warm up my son’s room right before bedtime. I would turn it on for half an hour after he went to bed, shut his bedroom door, and that would get the room warm enough for the night. He has a loft bed and heat rises to it worked well. If that hadn’t of worked our plan was to move him upstairs to his sister’s room which was one of the only rooms with a functioning baseboard heater.

You might not need one of these, but with the way my house is built, and the dampness of our November that year, we struggled with the humidity. The colder it got inside, the more the humidity rose. I fought the urge for about a week to get a dehumidifier, hoping the humidity would level off, because dehumidifiers for a large space can easily cost a couple hundred dollars, but when I couldn’t get it to drop below 75% I had to get one because I was worried about mold developing. I ended up getting a small unit, this InvisiPure Dehumidifier. Though much too small for my whole house space, it dropped the humidity enough that as long as I was careful about not boiling anything like pasta on the stove, it was enough. 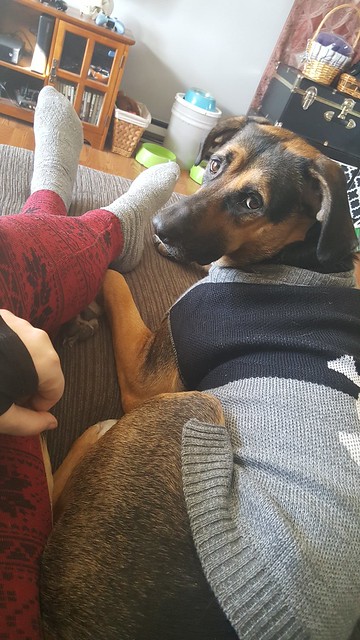 If you are a knitter, your time to shine has come! Regardless of your fiber arts prowess though, hopefully you already have a lot of these items if you live in a cold climate. We did, but we still had to pick up some extras of several items too. If you did not know, several thinner layers is warmer than one thick layer, as they traps air in the layers acting as an insulator. This is how we dressed on the colder days. I reaaaally love wool, but obviously if you have an allergy or are vegan avoid it.

Remember it is easier to stay warm then have to warm up.

They might seem old fashioned when compared to electric blankets, but they stay warm for HOURS and won’t further increase your electricity bill. Also you can tuck them in your bed 20 minutes before going to bed and everything is toasty for you. We still use them even though we have a new heating system now. We have four of these 2 liter rubber hot water bottles with knit covers and love them. Make sure you do not put boiling water in them, you will scald yourself.

Hot water bottles are my favourite thing on this list. Especially with blankets and cuddling. Remember local libraries have lots of dvds and audiobooks you can check out if you don’t have Netflix or Audible. We watched so many movies in the evening and listened to radio plays together during our heat outage, snuggled on the couch with blankets and hot water bottles. Might I recommend Welcome to Night Vale in the realm of podcasts by the way? So Good. Also if you watch Armageddon, put your kids on opposite ends of the couch because THEY WILL poke each other during the kissing scenes. Sigh.

If you want to read the rest in this series, this was Part 3.
– Part 1: when the heater fails
– Part 2: what to do immediately
– Part 4: what we bought

< Blessings of the Serpent
> Bone Runes